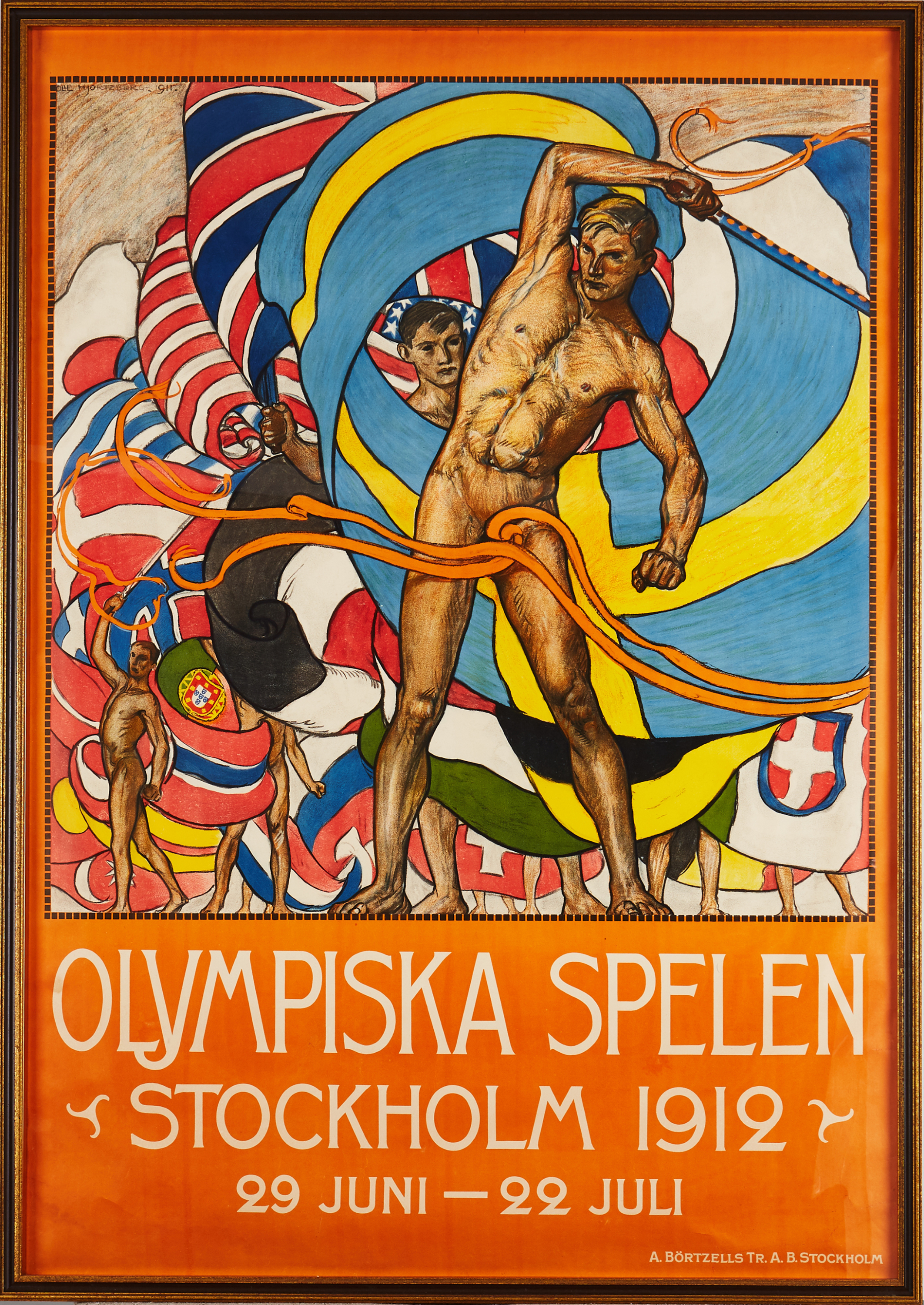 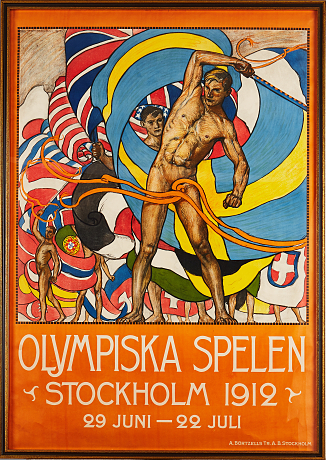 Official Poster 1912
One of the most important measures taken in connection with the work of advertising, was the adoption of an official Poster. After a thorough examination of several sketches sent in, and after having conferred with prominent Swedish artists in the matter, the Swedish Olympic Committee, at a meeting held on the 27 June, 1911, determined to accept the poster by Olle Hjortzberg, of the Royal Academy, which had been sent in to the Committee in 1910, but had afterwards been slightly altered, representing the march of the nations - each athlete with a waving flag - to the common goal of the Olympic Games. Thorsten Schonberg´s poster was placed second, this design representing the entrance of a Marathon runner into the festively decorated Stadium, while, as number three, came Axel Törneman´s poster, a javelin-thrower, with the Stadium in the background. The poster, the execution of which was confided to A. Börtzell´s Printing Co., Stockholm, was in seven colours, the size being cm. 75,5 × 107 cm. A proof was sent by the firm in the middle of October, 1911, after which the chief part of the order was completed during the course of the next three months, but it was found necessary to order additional copies, to satisfy the large demand for the placard received from various quarters. The same step had to be taken with regard to the advertising stamp, the advertising pamphlet and the general programme.

It is to be regretted that, in consequence of various circumstances, the poster was not in readiness earlier than 6 months before the Games as, for advertising purposes, it would have been of advantage to have had a greater amount of time available for its distribution, a task that now had to be performed in a very great hurry.
At first, the poster was printed in 8 different editions, each in a different language, but in consequence of the repeated demands made from several other countries, this number had to be doubled, so that it finally appeared with the text in no less than 16 languages, several of which caused no little difficulty to the printers. The total number of copies of each edition, as determined by the orders received from the various countries, were as follows:
English 26 800
German 16 300
French 13 000
Svenska 13 300
Ryska 3 000
Spanska 3000
Holländska 2550
Italienska 2000
Portugisiska 1850
Finska 1500
Ungerska 1400
Japanska 1000
Turkiska 800
Grekiska 750
Tjeckiska 750
Kinesiska 350
(Source document: Official report 1912, page 266)